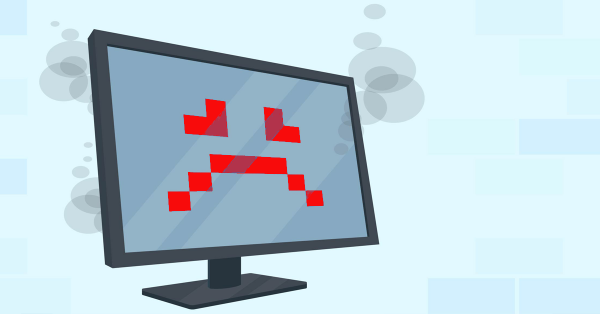 As you know computers always break at the worst possible time, but what things can actually cause that that failure? It is easy to think it was something you did at the time of the crash, but normal user actions are rarely the cause of the issue. In this blog post we list some of the real reasons for a computer crash.

People drop their laptop or spill things on their systems. Liquid damage is a big problem with spills the main cause – this could be anywhere from a spill on the keyboard or even a flood that reaches the computer. Laptop users need to be really careful when putting down their systems – surfaces can often have small puddles (especially cafes and kitchen tables). If you are lucky and the liquid didn’t fry the circuits and ongoing corrosion is likely.

A dropped or knocked computer isn’t going to be happy. Even a light bump can cause loose cables, disconnections and internal damage.

Computer parts have an expected lifetime, especially moving parts like fans or mechanical hard drives. Some computers can run 24/7 for up to a decade, while others can be barely used but fail within warranty. When age is the issue there are usually early warning signs like extra noise or slowing down, but the actual ‘break’ generally happens when you go to turn the computer on, perhaps after a crash or overnight – either it makes a valiant effort before giving up, or nothing happens at all. Sometimes lasting age is the luck of the draw with how it was manufactured, and quality does play a big part in how long it can keep churning.

Computers are very sensitive to both surges (too much electricity) and brownouts (not enough electricity). Some indicators of power issues are when the lights are dimming or flickering (during a brownout) or glowing just a tad too strong (during a surge). These variations usually last long but they can easily break your computer. A surge protector can guard against mild increases in voltage, but brownouts and strong surges can still cause damage unless a high end UPS (Uninterruptible Power Supply) is used.

Overheating is a big contributor to a computers death. The insides of a computer runs hot and they need plenty of cooling to keep them working optimally. You might not feel it from the outside, but internal components can rapidly build up heat that needs to dissipate. When fans and vents get blocked with dust the temperature continues to rise and components can bake themselves to failure. When the computer reaches a certain temperature the computer will automatically switch off (to try and cool down), however the more times this happens, the more likely your computer is to die.

Your data is stored on a hard drive and if you have a mechanical hard drive (most people do), it works a bit like a record player with a spinning ‘platter’ and a needle that reads it. General usage, small bumps, liquid, age, surges and overheating can all trigger hard drive failure. As well as making your computer unusable, hard drive failure means your data is also lost. While sudden breakage might leave you surprised, take note of any strange noises or repeated crashes and always back up your data.

Like a car, your computer needs to be serviced regularly. We can check your computer to make sure it is running right and will keep on working for you. Give us a call at 08 8326 4364 or drop us an email at support@dpcomputing.com.au.